This pocket-size booklet is designed by FAA as a flying “tool” for the average private pilot. It contains a composite picture of the observations, opinions, warnings, and advice from veteran pilots. Their experience and knowledge, if heeded, can make flying more pleasant and, above all, safer.
The list of contributors to this booklet is long. It is certain that one pilot could not have gathered all of this knowledge through personal experience. It is of equal certainty that each pilot, who reads this booklet, owes these men who gave gen­erously of their experience his thanks-and, perhaps someday, his life or the lives of others.
The FAA is happy to present this booklet in the name of all the people who have contributed to its writing.

Is the phrase “terrain flying” familiar to you? The Federal Aviation Administration hopes it will be because it is important to you as a pilot.
The dictionary defines ·’terrain” as: ” … a tract or region of ground immediately under observation”-so terrain flying refers to the problem of flying over various kinds of landscape.

We have gathered here some thoughts, advice, warnings, and “hangar flying” which we think you ought to read and study.
There was a time-and not so long ago-when all pilots talked “terrain” before every flight over a new route. That is still a good idea. But with the advent of more and better instruments, radios, air markers, charts, etc., as well as more dependable engines, and planes with longer range, the practice is less prevalent .
The idea still is so good that we are going to do a lot of “terrain talking” with you, and present in this booklet the best thoughts of those who have “been there ” before you. (1)
1 This is not all the advice you need. Certainly, there are many other helpful ideas not included here. We hope other experienced pilots will share their knowledge and send in ideas for a later revision of this booklet.

Those who have contributed ideas for this booklet have learned what they know in two ways; by personal and often rugged experience, and by talking to knowledgeable and experienced pilots before starting off over terrain new to them.
The knowledgeable and experienced pilot is not always available. You can’t depend on his being at the airport before you take off on a new flight. So here are his ideas, his warnings, his do’s and don’ts. And this composite pilot presented to you by the FAA is a cosmopolitan sort of man; he’s been everywhere, from freezing Point Barrow to torrid Central America, from the swamps to the badlands, over stump lands, over mountains and deserts, over the flat square miles of Minnesota and Manitoba, and the soggy delta of the Mississippi.

Note well that we are not talking about weather as such in this booklet; nor engines, nor instruments, nor techniques of navigation.  All of these are important and at times are mentioned in this booklet, however, they are covered fully elsewhere; for example, in the FAA publications Path of Flight, Realm of Flight, Facts of Flight,, Private Pilot’s Handbook of Aeronautical Knowledge, and Aviation Weather.  We’ll stick primarily to terrain flying. 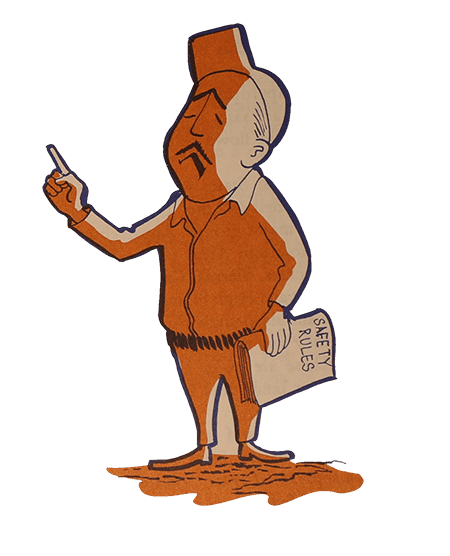 Neither is this written for the airline pilot, nor the pilot of a plane in industrial use–well equipped with navigating instruments, radios, and perhaps with two or more engines. This is essentially for the beginner pilot, the man or woman who flies a small airplane with radio and a minimum of instru­ments, who wants to use his or her plane for pleasure, vacation flying, or maybe personal business.

When this booklet was originally published, most of the material was contributed by experienced pilots from various places.  In this revision the contributors are not referred to by name since they may no longer be in the same area or doing the same thing. However, the most important consideration to them, and also to you, is the fact that their excellent advice is being passed on to you–and the advice given in this booklet is theirs.

You can learn a lot from experienced pilots so just drop your flaps and keep tuned in. Note well that there is no advice in this booklet against flying in any particular section of the United States.

If you can fly, you can go almost anywhere. It’s wonderful to be able to fly over mountains, swamps, deserts, and to see and to behold. Moreover, it is safe, if you do it right. What this booklet wants to say is that you are welcome anywhere in your airplane when you have the appropriate “know how” and equip­ment; and you are safe, if you take the good advice of those who have flown before where you are flying now.

In the United States we have a wide variety of terrain. In the “first 48” the “problem” terrain divides itself into five major groups: Appalachian Mountains, The Great Mountain Areas of the West and North­west (the Rockies, Sierras, Cascades, etc.), Flatlands of the Midwest and High Plains, Swamps, and Deserts. Perhaps we should include three other classifications, although they are not of the size or nature of the first five. These are cities and industrial areas; bad­lands, cut-over lands, and frozen wastes; ocean, bay, and lake shores.
In a class by itself is Alaska. We have included our 49th and largest State and the routes leading to it in a separate chapter.  So also with our neighbor to the south, Mexico. 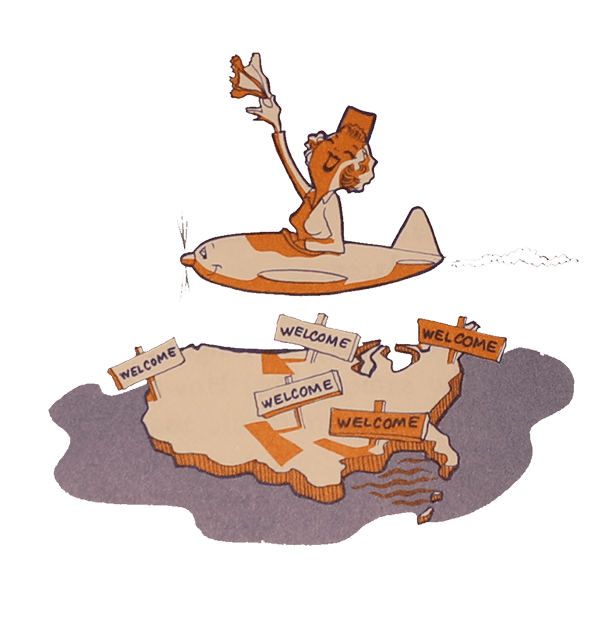 Let’s look at some reasons for a serious study of terrain flying. Say you have learned to fly around Muncie, Indiana. The countryside consists of fairly large and very flat fields. The weather and the winds and the towns are very well known to you, part of your daily life.

While you are still a new pilot you take a flight to the West Coast, encountering high mountains and uninhabited deserts. Your familiar friends, the section lines, that appear to be designed just for your convenience, disappear.  The winds are “all mixed up” in the mountains, compared to what they were in Indiana.  Even the clouds are different.  “This,” you say, fighting a downdraft in a narrow valley, “is different!”  And over the desert: well, you just never see anything or anybody.

Or maybe you take a trip to Florida, cutting corners and flying straight courses, even if they take you over some somber-looking swamps.  If your engine sputtered over Ohio, you would generally have a choice of any one of several fields in which you could make a forced landing.  Over the Everglades, you would almost twist your neck off trying to find a likely dry spot, and you would send up a little prayer of thanks if the engine purred again.

Flying is flying, but the terrain below you isn’t always good old flat Indiana.

Forewarned of special conditions by knowledgeable pilots, you can adapt your flying accordingly.  The FAA urges you to read this booklet before you take off into strange country.  For your convenience, it is divided according to eight classes of terrain; and while there may be repetition in some of the advice given, read it, remember it, and live to fly.