The Rockies are not like the Appalachians. In many respects they are far more strange and awe-inspiring to the average flatland pilot. They cover more area, they extend higher into the clouds and they present a greater variety of terrain than their eastern counterparts. Before you tackle any part of the Rockies, read about them here and get advice from the most knowledgeable pilot at your point of takeoff.

Here is some general advice which will fit most of the mountain areas.

The visual aspects of the mountainous and desert country can be very deceptive.  Pilots should maintain a 2,000 foot clearance over both mountains and deserts at all times.  Often, when a pilot is trying to find an 8,000 or 9,000 foot maintain as a landmark, he will miss it because he will be looking for a large mountain when in reality, it will be little more than a knoll, as the foot of the terrain is 4,000 or 5,000 feet.  Rely upon the compass at all times.

The extremes of heat and cold must be considered on all flights.

In the event of an emergency landing during extreme heat, it is wise to carry an effective sunburn preventive to rub on face and hands exposed to the sun and have some sort of treatment for chapped lips.  Dark glasses and a cap with a generous sun visor would also be very helpful in this situation.

In the summer, flights in this whole area should be started as early in the morning as practicable. This makes each trip more enjoyable because it avoids the terrific updrafts and downdrafts, turbulence, and westerly winds that usually increase in speed as the day progresses.

Wherever possible, all trips through Rocky Mountain areas should be near a highway, airway, rail­road or through a valley; there are more check points; it is easier to navigate; and, if trouble develops, you are closer to help. Sometimes the airways will lead a pilot over impossible terrain in regard to his chance of making a successful forced landing, or survival in the event of a reasonably good landing. We cannot overemphasize the importance of filing a flight plan and remaining with the plane in the event of a forced landing.

Most fields you will use are at higher altitudes than those you have been using back home. This means a longer landing run and longer takeoff run. Because of the mountains, there is generally greater air tur­bulence. Wind velocity and turbulence usually increase during the day. Thunderheads build up over mountains during summer afternoons.

The last two items mentioned, high-altitude air fields and turbulence, are invariably stressed by all pilots with local experience. The factor of thin air at high elevations (high-density altitudes) cannot be emphasized too much for newcomers to mountain flying.

However, the term “high elevation” can be misleading. Temperature is also a very important factor. Keep in mind, for example, that Denver on a hot summer day could have a density altitude of better than 10,000 feet, while on a very cold winter day, density altitude could drop to sea level.

When it is necessary to take off from a short airport, or one at high elevation, with a load that worries you, it would be wise to take off first without the load to learn the actual performance characteristics of the airplane. Then add partial loads, making this same check, until you have all that can be handled safely. Sometimes it may be wise to ferry partial loads to a larger airport before taking off with the complete load.

Use all the runway for takeoff. Do not unconsciously try to pull the aircraft off the ground after you have run a certain distance or time which you may have been in the habit of doing. Put the aircraft in a shallow climbing attitude and let it fly off. It will then either stay on the ground or, when it does get in
the air, it most likely will stay there. Check the Airplane Flight Manual or Owner’s Handbook for explicit instructions for the particular airplane and situation.

There are some one-way, high-altitude fields in the Sierras that are being frequented by untrained pilots. When we say ”one-way,” that’s it. The landing must be made the first trip-only disaster awaits an attempted go around. Although the fields can easily be used safely with planning and skill, never go into them without a dual trip first with a knowledgeable instructor with experience at operating in and out of this type of field.

On the back of an aeronautical chart printed and distributed by the Idaho State Department of Aeronautics, you will find comments along this same line. Know the field you are going into. Check with experienced mountain pilots if possible-know the altitude, the length, and whether it is a one-way field. (If it is a oneway
field, follow the advice in the preceding paragraph.) Most of these fields are one-way and on many it is impossible to go around if you overshoot. Before you fly into this territory practice short field landings with power, upwind, downwind, and crosswind. Be sure you can set your plane down on a fifty-foot spot, not once in a while but EVERY TIME. You cannot make mistakes in this territory.

Take advantage of any opportunity to learn to make approaches and landings on an airstrip with an upgrade-the steeper the better. This technique is unique and it will be an interesting experience. Do not try to teach this to yourself.

The importance of updrafts, downdrafts, turbulence, and high winds must be recognized by those flying in mountainous terrain.  Not only can it make flying unpleasant at times but it can become dangerous to the point of disaster late fall months. 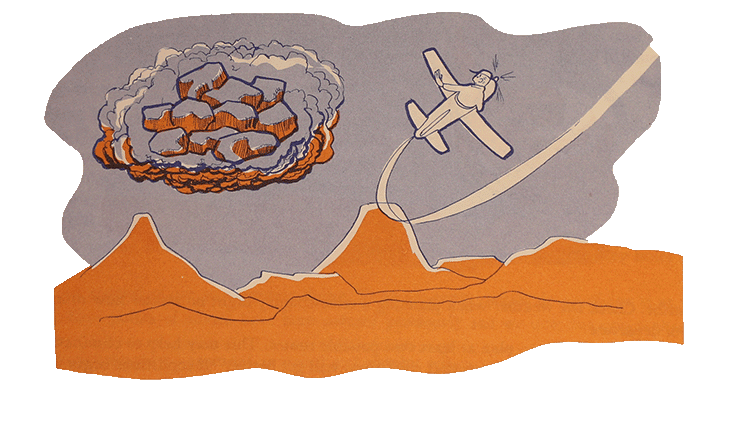 Check the weather when planning a cross-country flight no matter how nice it appears at your point of departure.

It is an excellent practice to plan at least two possible routes. This may help to eliminate the practice of “going a little bit farther in the hope that condition will get better.” If conditions begin to deteriorate, make a 180- degree turn (often said to be aviation’s most dependable safety manuever) and either try an alternate route or wait until another day.

Don’t be afraid to retreat in the face of danger. “He who fights and runaway lives to fight another day” may be a good adage to follow in a situation like this.

Learn to use the mixture control, especially on late model, high-performance airplanes. Know the effect of carburetor heat usage on mixture control settings when flying at high altitudes. This should be learned through actual demonstration by a flight instructor.

When flying in this part of the country, you should have a good airplane and sufficient fuel. It has been suggested that the pilot with little experience in mountain flying have an airplane that will climb atleast 200 feet per minute at 15,000 feet. If he doesn’t have such a plane, he should go around the high terrain. In any case, this is the best course; file a flight plan, stay on course, and stay with the plane so that search for you is made easier in the event of trouble. In an emergency, land in an uphill direction in the mountains whenever possible.

Don’t walk around in the mountains at night. Miners have a habit of digging deep holes and leaving them ungarded.

So much for general advice on mountain flying. There are many specific do’s and don’ts as well.

Some excellent points of advice have been covered previously and we now list others that should be helpful to you.