''Graveyard of pilots,'' they used to call that part of the Appalachian chain of mountains known as the Alleghenies. That still goes today, not only for the Alleghenies, but for the entire chain as far as the unwary pilot is concerned. This includes those mountains from the Blue Ridge and Smokies down South, to the White Mountains in New Hampshire. These are mountains of general similarity, different from the Rockies, and oh, how different from the flatlands in Indiana. Naturally, there are fewer airports. Also, it is generally much easier to become lost over mountainous terrain.

The Alleghenies extend from Pennsylvania to North Carolina. Because of their geographic location, there is more air traffic passing over this range than any other mountains in the world. No small part of this traffic is made up of VFR light-plane flights. Many of the pilots of these flights depend greatly upon pilotage as an aid to navigation.

That part of a heavily traveled east-west airway which crosses the Pennsylvania Alleghenies was known to the early-day mail pilots as ''Hell's Stretch." It was so named because of the difficult situations which often arose due to a combination of adverse weather conditions and mountainous terrain. Fragmentary en route reports and forecasts that were telephoned or telegraphed "along the line'' made up the only available weather information.

0ccasionally an airmail pilot would crash into a mountain ridge that he never saw because it was obscured by snow, rain, or clouds. This would sometimes occur even within a very few miles of Bellefonte, Pennsylvania, the refueling stop between Newark and Cleveland. 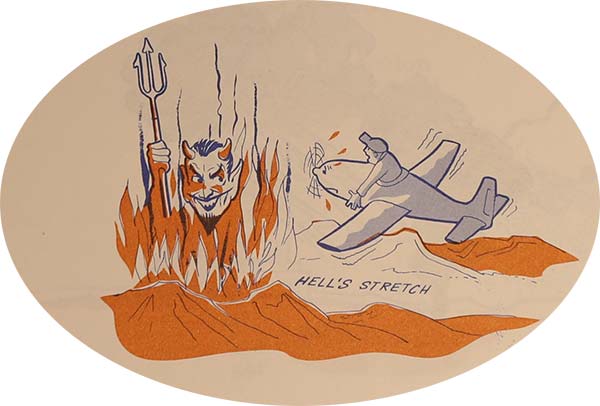 Today's vastly improved weather information and communications have contributed greatly to a de­crease in such tragic incidents. The pilot, however, who does not avail himself of this weather information and attempts to fly over mountainous terrain, or any other terrain for that matter, may find himself in a predicament quite similar to that experienced by many of the pioneer airmail pilots.

Although well-briefed with the latest weather information, a pilot should keep in mind that conditions sometimes develop quite rapidly in the mountains that have not been forecasted nor reported. Blinding snowstorms in the winter and violent thunderstorms in the summer are not unusual.

It has been said by experienced pilots of southwestern Pennsylvania that an independent ''weather factory" occasionally goes into operation in the vicinity of Blairsville, Pa., at the foot of the west slope of the Alleghenies. Weather conditions sometimes exist there that one would never suspect after checking Pittsburgh's 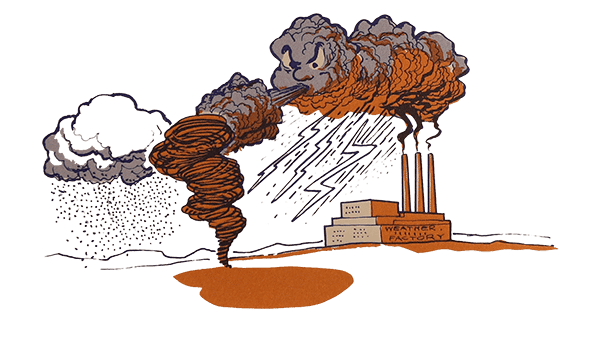 Allegheny County weather, 35 miles to the west, or Altoona's weather, 50 miles to the east. It is also well to remember that a reported ceiling of 2,000 feet at Altoona, Pennsylvania, means that the next ridge west (approximately 10 miles) is quite possibly obscured. Another "valley" airport in the Alleghenies reporting the weather on the teletype circuit of aviation weather reports is in Elkins, West Virginia, at an elevation of 1,987 feet. About 22 miles southeast of Elkins is Spruce Knob which has an elevation of 4,860 feet.

A route followed by many pilots who prefer to navigate by pilotage while crossing the southern Pennsylvania Alleghenies is the Pennsylvania Turnpike. If weather conditions are forcing a pilot to a low alti­tude, a landing is recommended at the earliest opportunity. The highway is tunneled through mountain ridges at eight different locations and it will be noted from the table which follows that the terrain extends as much as 900 feet above the tunnel.

Through the Pennsylvania Aeronautics Commission we learn that the pavement elevation at either end of each Pennsylvania Turnpike tunnel and the elevation of the terrain directly above each tunnel is as follows:

The length and curvature of some of the tunnels might present a real problem with limited visibility. The turnpike may not come out on the other side of the mountain at the location where you think that it should. Thus you might lose it on the other side. With sufficient altitude and visibility, however, there should be ''no sweat."

Many pilots, when flying over the Alleghenies from the Pittsburgh, Cleveland, or Detroit areas to the Southeastern States, prefer to ''dog-leg it', rather than fly direct. Properly planned, the comparatively few additional miles of ''dog-legging', shortens the distance of mountain flying considerably and skirts the higher terrain. Such ''dog-legs" are: Follow a course or pick up an airway out of Pittsburgh or Morgan­town, W. Va., toward Washington, D.C., until across the mountains; or fly a course to Charleston, W. Va., and pick up an airway or course via Roanoke or Pulaski, Va. Of these ''dog-legs'' the latter requires flying over more mountainous terrain.

Although not considered as mountainous terrain, the western foothills of the Alleghenies in West Virginia all the way to the Ohio River are even more rugged than the mountains themselves. This most irregular relief affords very few natural landing areas. Some West Virginians claim that their State would be the largest of our fifty-flattened out. Any argument to the contrary from the pilot ranks is quite unlikely.

It is a wise practice to seek advice from local operators before taking off on a mountainous cross-country flight, and it is further advisable to file a flight plan. Another point to bear in mind is the rapidity with which dusk closes in at the end of the day in the mountains. Allow yourself an extra half hour if your destination is in mountainous territory.

Do not fly below 2,000 feet above the terrain, and be sure to fly higher if a strong wind is blowing. Turbulence, with severe updrafts and downdrafts, may be present. Allow yourself ample airspeed for com­batting these conditions especially when landing at places of higher elevation. 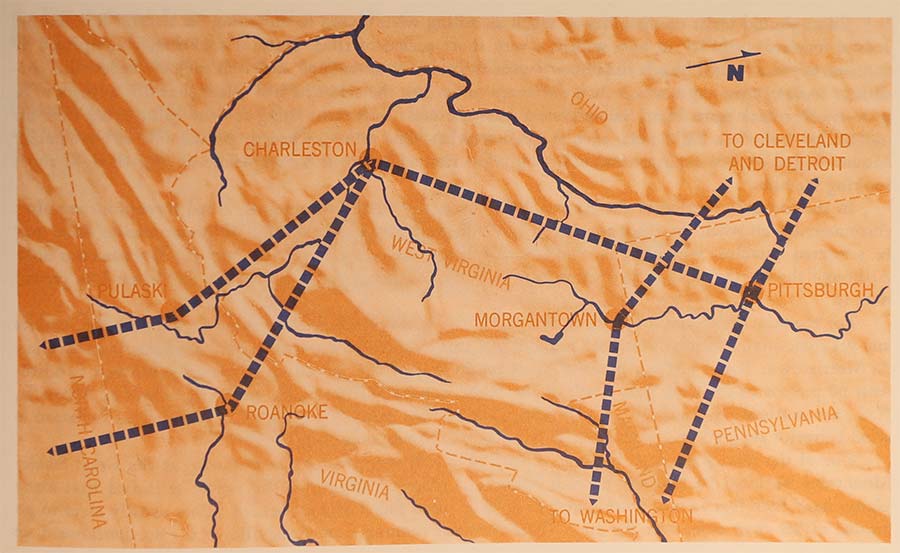 Pilots should insist on visibility as much as ceiling when flying in mountainous terrain. Rainfall can reduce forward visibility to zero within a very short period of time. Natural darkness, accompanied by summer thu1nderstorms, blends in perfectly with the color of mountains, and it is difficult under such con­ditions to determine any horizon. It is very easy to fly into the side of a hill when that hill appears to be only another dark spot. Many pilots believe that the most important thing for any pilot flying over the mountains is to file a flight plan, even in good weather. One pilot cracked up on the side of Grandfather Mountain and died of exposure and not of injuries. He had been out 5 days before anyone thought about looking for him.

In the southern portion of the Appalachian chain, the Smoky Mountains, cloud formations are often encountered even when the skies are clear a short distance away. At the edge of the mountains there may be scattered cumulus, which increase in size and height as one gets farther into the mountainous area. Although the weather may be perfect on each side of the range, poor visibility can and often does prevail over it.

For the pilot inexperienced in mountain flying, the safest plan is to land at an airport near the Smokies and get some advice from pilots experienced in this area. Mountain wind conditions are sometimes peculiar. At Morristown, Tenn., just north of the Great Smoky Range, the prevailing winds are southwest to north­west 60 percent of the time. Just south of the range, some 60 airline miles away, the winds at Asheville, N.C., are southeast to south 26 percent of the time and are calm 45 percent of the time. This variation in wind behavior suggests special caution in Appalachian Mountain flying.

One of the most hazardous portions of this mountain system is the area known as the Great Smoky Mountains National Park which extends for several miles up and down the range. It is said that many planes have been lost in this section and have never been found so experienced pilots usually elect to go around rather than cross over the area. There is a pass running from Asheville, N.C., northwestward up the French Broad River toward Newport, Tenn., where the crossing can be made at 2,500 to 3,000 feet if the visibility is good.

A good general suggestion as to the best routes to follow through this region is to choose from a sectional chart a main highway or railroad that runs along the desired course and stay with it even though it meanders somewhat. This is sound advice for almost any kind of difficult or isolated terrain. Following are some comments relative to VFR flights eastward from Memphis and Nashville and southward from the "Tri-Cities," Tenn., area, since you will often enter the Smoky Mountain area from these cities. 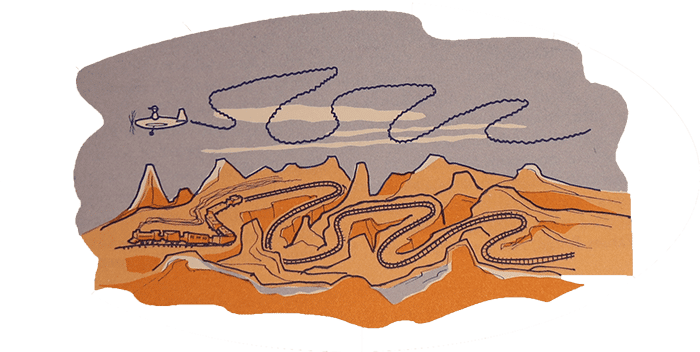 FROM MEMPHIS, TENN.: The terrain becomes gradually more rugged eastward toward Nashville, Chattanooga, or Birmingham. In such areas, it is difficult to follow highways and railroads, and compass courses will have to be used for considerable distances after the general heading and drift have been established.
FROM NASHVILLE, TENN.: The terrain is hilly but not mountainous. You won't find good straight section lines to follow, but there are no especially hazardous sections to be avoided. Use your compass, ground checkpoints, and radio.
FROM TRI-CITIES (Bristol, Kingsport, Johnson City Tenn.): If you enter the region from this area, you already have some mountain-flying experience, useful in flights toward Knoxville and Chattanooga or across the gap to Asheville, N.C. From Knoxville toward Chattanooga there are two main highway­railroad systems, both of which follow the valley routes. From Knoxville toward Atlanta, the preferred course is the highway-railroad system running through Maryville, Etowah, Chatsworth, and Cartersville. It would be unwise for novices to plan flights south or southeast from Knoxville.
There are many other routes, of course, but the experienced pilot is your best bet. For example, he would not recommend any courses that would cross the mountains north to northeast of Atlanta.
Other small ranges of mountains are similar in conformation to those of the Appalachian Chain, notably
the Bostons and Ozarks in northern Arkansas and southern Missouri and the Ouachitas of eastern Oklahoma.
No peaks in this area exceed 3,000 feet elevation, and all the advice already given concerning Appalachian flying should be applied when flying in this area. From the Memph is area to Kansas City the novice is d vised to go via Walnut Ridge, Ark., and Springfield, Mo ., thus following a valley route with a railroad.