The NTSB has released the initial accident investigation findings from the October 2019 crash of the Collings Foundation Boeing B-17 Flying Fortress.  The crash killed seven people.  The 74 year old World War II bomber was destroyed in the crash.  The initial findings from the NTSB gives some insight into what happened that day. 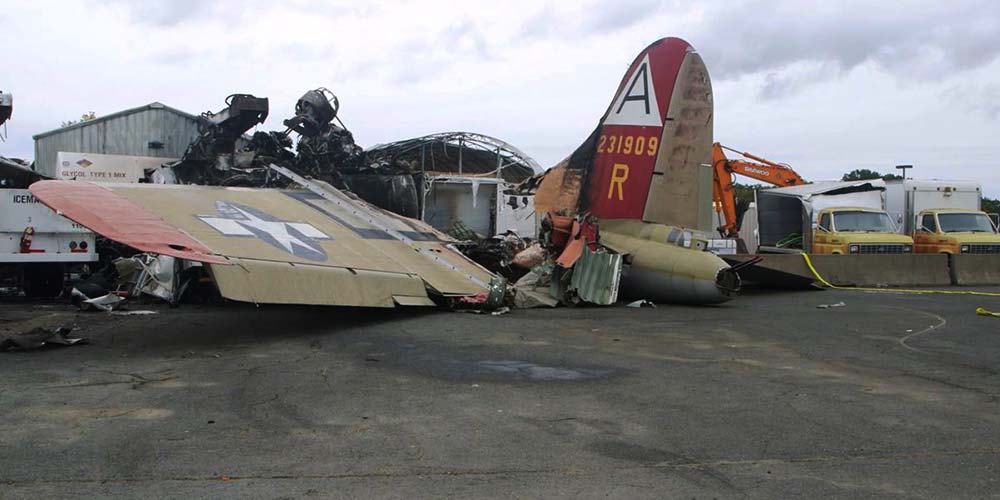 The accident flight of the B-17 dubbed “Nine O Nine” occurred on October 2nd 2019 at the Bradley Airport in Windsor Locks, Connecticut.  The weather was VFR at the time of the crash.

The NTSB public docket containing the investigation evidence thus far gives us a clear picture of the flight path and ATC communications during the accident.

12 people were on board the aircraft at the time of the crash.  The pilot Ernest McCauley (age 75), and co-pilot Michael Foster (age 71), were both killed in the crash.  There were 10 passengers on board, each of whom donated $450 to the Collings Foundation in exchange for a seat on the flight that was offered as part of the Foundation’s special FAA Living History Flight Exemption certificate.

The flight departed from Runway 6 at KBDL (see diagram below showing runway intersection departure).  The flight was handed off from tower to departure, and upon checking in with departure the crew stated their intent to return to the airport immediately.  The crew did not declare an emergency (see cockpit transcript here).  The departure controller did enquire as to the reason for the return and the crew stated they had “a rough mag on #4”, assuming there was an issue with a magneto on the #4 (right outboard) engine.

The departure controller asked if the crew needed assistance and if the flight required priority to land.  The crew stated “negative” for assistance, but did say “i kinda would like to be on the ground as soon as possible.” 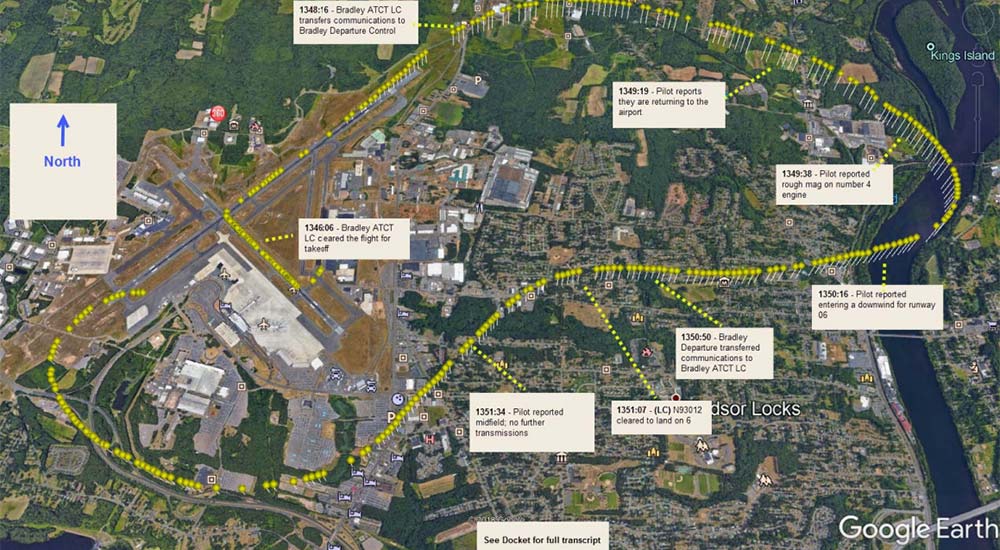 The crew maneuvered to join the right downwind for Runway 6.  The last transmission from the crew was reporting “midfield” as they descended to about 300′ agl.  As the crew continued to descend towards the runway in a low energy state, with one or possibly two of the right engines not producing full thrust they were faced with a very real problem.  The engines on the left wing were not only yawing the aircraft to the right, but also the engines on the left wing were likely working harder producing more thrust to make up for the lack of thrust on the right side of the aircraft, further causing more thrust asymmetry and asymmetry of lift between the wings.

Despite the issues, investigators did conclude that it was theoretically possible for the aircraft to have made it back to the field safely, but as we all know aviation rarely works out just as perfectly as the engineers intend for it to. 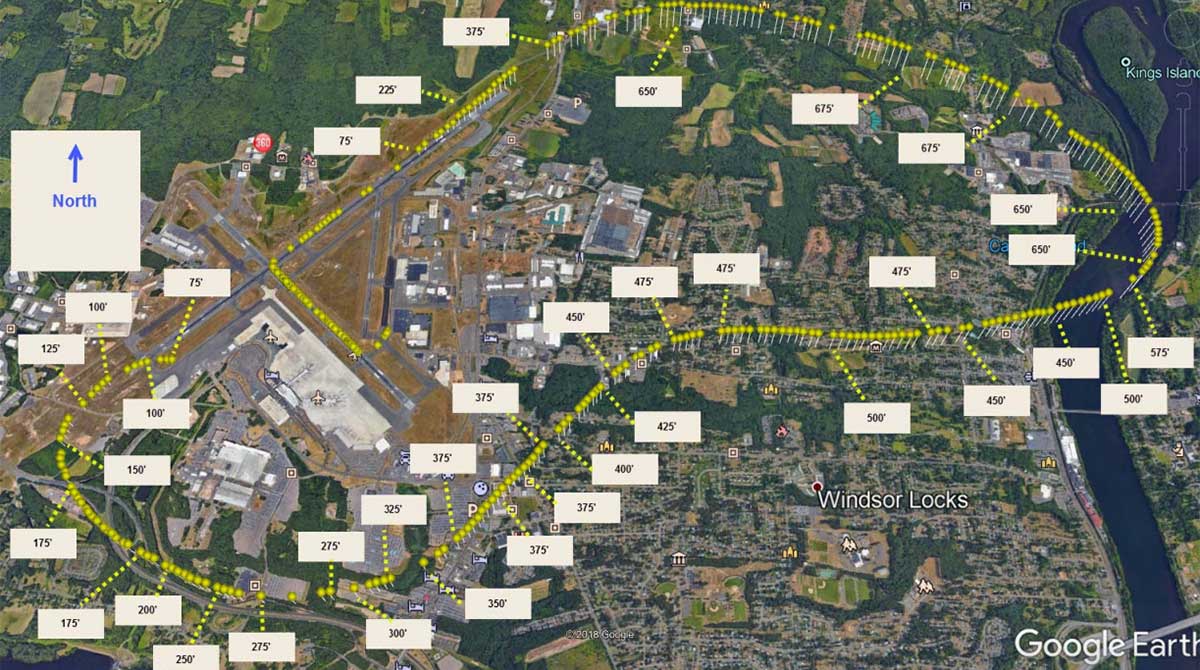 The report noted: (Examination of the wreckage indicates that the flaps were up, and video evidence indicates that the landing gear was down during the downwind leg of the traffic pattern.) The effect of airspeed on power required, flight path angle, and rate of climb is also presented, and indicates that during most of the flight, the airspeed was below the airspeed that would maximize the flight path angle (the condition required for maximizing the distance flown for a given altitude loss), and suggests that the airplane might have been able to clear the runway approach lights and reach the runway 6 threshold if the airspeed during the return to the airport had been higher (and/or if the landing gear had been kept raised until landing was assured).

The FAA revoked the Collings Foundation’s Living History Flight Exemption in March.  They noted maintenance issues found in both the #3 and #4 engines on the right wing, as well as other issues.  At the time, McCauley (the pilot) served as the Foundation’s Director of Maintenance as well as the PIC for 909.  This potential conflict could have led to the maintenance oversight that caused the issues in the October crash.

“Regarding engine 4, to prevent the magneto ‘P’ leads from separating from the magnetos, someone had attempted to rig the magneto leads in place with safety wire. Inspection and testing of engine 4 left magneto revealed the movement of the safety-wired lead caused grounding to the case, which rendered the magneto lead inoperative. In addition, the right magneto of engine 4 was found unserviceable,” the agency stated in its decision. “An inspection of engine 3 showed all spark plugs electrode gaps were out of tolerance, fouled, and revealed various signs of detonation. Further inspection of this engine revealed problems with the cylinders.”

The Collings Foundation is now defending itself in three lawsuits brought about since the crash.  The Foundation has historically flown warbirds around the country, charging “donation fees” to help fund the maintenance and operational costs to keep the aircraft flying.  Besides the B-17 dubbed 909, the Foundation owns and has operated many other WWII aircraft including a P-51 Mustang that you could ride along in for a $3,500 donation.

In conclusion, for those of you who do not want to sift through the FAA and NTSB findings.  It appears as with many accidents, that this was a case of poor decision making.  Whether it be the decisions made during maintenance on the ground, or the decisions on the ill-fated flight.  While we will have to wait several more months for the official “probable cause” from the NTSB, this accident, like many others, serves as a stark reminder to all in the aviation community that safety is no accident.  Safety is achieved through careful and thoughtful maintenance, training, and ADM.  Hopefully, we can all learn, and be reminded of the role we all need to play, so that this part of history does not repeat itself.