Companies that pay for flight training

What company will pay for your flight training?  The answer is, a lot and nobody.  While that’s confusing, let us explain.  Absolutely nothing in this world is free.  Once you understand that, if your question is, “what company will help pay for my flight training, or give me training at a reduced cost?” then we can help you.

There are many different roads to go here, but ultimately to have someone else pay for your flight training it is going to have to benefit them in some way that you become a pilot.  Generally speaking, if your flight training costs $10,000, they will need to extract more than $10,000 in value from you becoming a pilot over a defined period (usually 1-2 years).  In some cases the company may be willing to realize their investment over a long period of time.  Take a look at the video below.  This is how Lufthansa Airlines pays for their pilots training.


Pilot Training paid for by the Airlines

So does Lufthansa actually give their employees free flight training?  Yes and no.  While they foot the bill up front, the employee has a contract that they have to work for the airline for so many years to ultimately pay back the “loan” the company gave the student to complete the flight training.  Because it costs nearly $200.000usd to train a new hire to the point they can go fly an Airbus for Lufthansa, the contract that requires them to work for the airline is much more than just a few years.

US based airlines paying for pilot training

In the United States, some airlines like Jet Blue are starting to use a similar model to the Europeans.  Jet Blue offers a guaranteed job to cadets that enroll in their program.  Again, however, the flight training provided to the “employee” is nothing more than a loan that must be repaid to the company.  If the student fails flight training, or chooses to not fulfill the requirements of building so many flight hours after earning their commercial certificate, they will not get their airline pilot job, and will still be on the hook for over $100,000 loan.

How to pay for flight training

If you don’t want to become an airline pilot, or are just looking to get started with flight training and earn a Private Pilot’s Certificate, there are other avenues to get your training paid for.  We’ll go over a few different ways this can work for you.

Working at a Flight School

Get a job working at a flight school answering phones, washing airplanes, and maybe working in the hangar helping out with basic maintenance.  It is common for the flight school to give you a steep discount on the aircraft rental costs if you are working there, and potentially trade some of your work hours towards flight hours (avoiding paying tax on the income, although there is probably some law against that, it has been common practice for the last 75 years or so).  There generally is not a “contract” time period you have to remain employed for to avoid repaying these benefits.  Instead, working at a flight school to pay for flight training is more of a “pay as you go” model (or “work as you go”).

Find a job as a Line Guy (or girl) 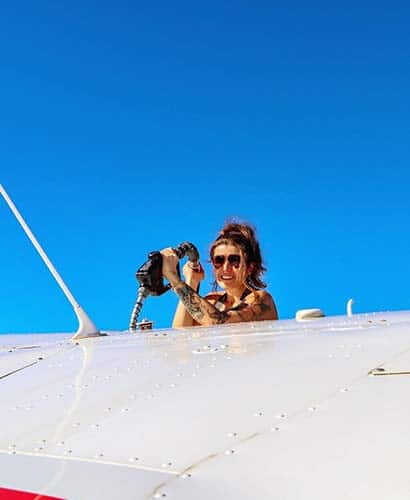 A “line guy” is someone who helps park aircraft as they arrive at smaller airports, fuels airplanes, potentially washes airplanes, and moves larger aircraft with tugs in and out of hangars for private aircraft owners.  Being that you’ll obviously spend a lot of time around aircraft owners, this job just may land you an opportunity to makes friends with someone who will let you use their airplane for little or no cost towards flight training (expect to repay them in some way such as washing the plane, helping with maintenance, etc.).  The FBO (fixed-base operator) is who you would be working for in this case.  FBOs are the companies at airports that sell avgas (airplane fuel), jet fuel, offer maintenance, and other aircraft services.

FBOs can often time also own one or two small aircraft you may be given access to as an employee benefit, or be able to trade your working hours in exchange for hours using the planes. Similar to working at a flight school, working at an FBO to pay for flight training generally would not have a contract tied to it.

Free or reduced-cost training as an employee benefit

If you’re looking for an employer to foot the bill for your training up front, you’re going to have to look hard.  While it is not impossible to find, most employers are uneasy investing in employees when there is not a guarantee they will be able to recoup a large investment such as flight training.  Typically, if your employer is going to pay for your training in addition to your regular salary, there will be a contract terms attached to your training costs.  That means if you leave the company prior to the term of the contract expiring, you will have to repay some or all of your flight training costs.

When does a company pay for flight training? 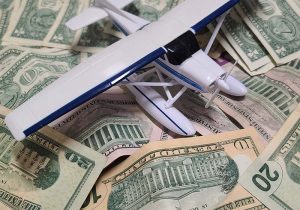 A company will pay for pilot training when they feel it will either make the employee much more valuable to the company, or if they feel the employee is already very valuable and want to offer benefits to try and retain the employee (without just throwing more raw money at the employee in terms of wages or vacation time).  It is likely you will have to sign an employment contract to receive such a benefit (so that the employer will be able to realize a return on investment in you, either in length of tenure with the company or in an increased skill set from your flight training).

An example is FLY8MA.  FLY8MA offers heavily subsidized flight training to its employees, but does require a contract be signed that ensures the employee will stay with the company and be a valuable asset in the future.  It is supposed to be a win-win, the employee becomes a pilot without having to fork over a ton of cash or take out a loan, and the company benefits from a more knowledgable and happier employee.  The key things to remember here if you’re lucky enough to have an employer who is willing to pay for your flight training are:

Sure it does.  Can you get a pilot license without spending a single dollar?  Yes.  The same way many people have earned a license for the last 10 decades of aviation.

In conclusion, if you want to earn a pilot license without spending a dime of your own money, it can be done, just be prepared to pay with your time and hard work.  Many pilots have earned their licenses totally for free (in terms of dollars), but they paid with their hundreds or even thousands of hours of sweat sweeping floors, washing planes, and turning wrenches, all while living as cheap as possibly essentially making no real money in the process.  If that doesn’t sound like its for you, no problem, get a job, and write a check to the flight school, or take out a loan.

If after reading this you still are looking for a way to get free flight training without having to do any work for anyone else in return, then I strongly recommend you buy a new pair of shoes.  You’re going to doing a lot of walking in your life, and not a lot of flying.