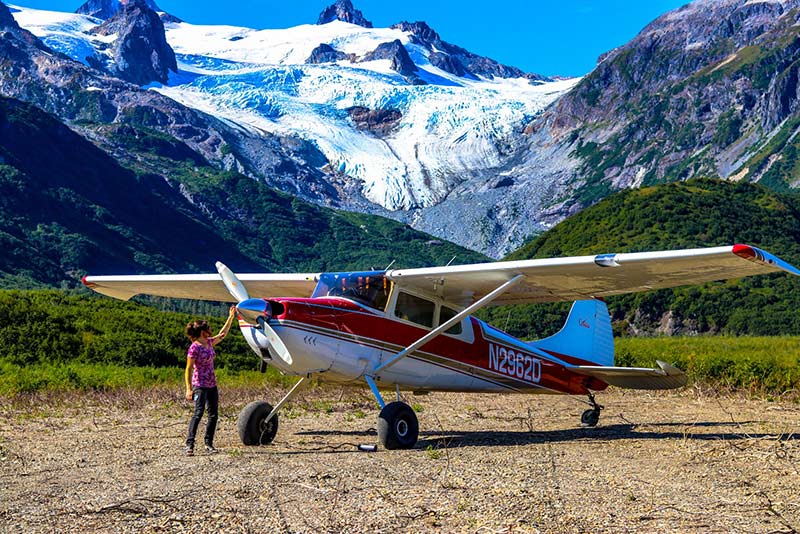 There is no such thing as the perfect airplane… or is there??

As far as certified airplanes go, the Cessna 170B is as perfect as they get. What do I mean by this? Well, it is the balance between a commuter, freight hauler, trainer, bush plane and all-around fun plane while still being fairly affordable. The fact that this airplane can be used for all these different purposes is actually the drawback, because it is not the “absolute best” for any one of these categories in isolation. Most importantly the C170 has an prestigious look that pilots and spectators cannot resist with its unique curvy tail feathers and overall stylish fuselage makes a classic taildragger.

When it comes to trying to figure out which plane is the right one for your needs, you will certainly hear the phrase “it depends on what you want to do.” That’s right, each different airplane has a purpose. However, in my humble opinion the 170 is a beautiful balance between several different purposes.

There were 5,000 C170s manufactured between 1948 and 1956 and three different versions: C170, C170A and C170B. These are single engine, piston airplanes with a gross weight of 2200 in the normal category. There are also many different “mods” and STCs that can be applied to the 2000 remaining ones flying today.

The original Cessna 170 had a metal fuselage with fabric constant-chord wings, zero dihedral and rounded tips connected with V struts. The flaps were plain and extended up to 30 degrees. This plane was powered by a Continental O-300 producing 145HP. This early model also had three 12.5 gallon fuel tanks taken from the Cessna 120/140 models.

Cessna began the  “A” model production in 1949 featuring all metal tapered wings with squared off tips connected by a single wing strut and boasting two 21 gallon fuel tanks. This model still had plain flaps but slightly increased in size and the range was up to 50 degrees.

In 1952 the “B” model was created inspired by the war plane C-305/Bird Dog, featuring 3 degrees of wing dihedral and fowler flaps that lowered to 40 degrees. The horizontal stabilizer and elevators were improved, trim tab enlarged and mass balance inserted to the tips of the elevator to relieve control pressures.

How can you tell apart the latest models of the C170B? The last year of production was 1955 with a square rear window rather than rounded. In 1956 there were still a few 170s being made but Cessna realized that a tricycle gear plane was much easier to land, and thus the production of the 172 began which put an end to our beloved taildraggers (until the mighty skywagon!). 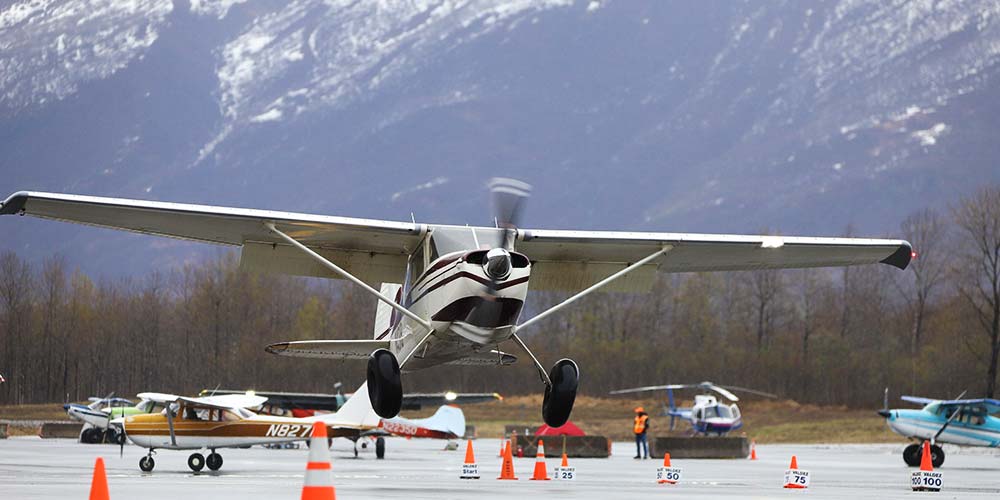 As we have previously mentioned, the C170 is the best of both worlds. What are these two worlds? One of these refers to the high performance, high gross weight, fast cruiser such as a skywagon or stationair VS the other extreme featuring light sport planes such as a super cub or cessna 120/140.

The performance of the 170 fits in the middle, cruising at about 120mph, empty weight 1220, gross weight of 2200 lbs, stall speed about 50mph and a climb rate of about 700fpm. This airplane has the ability to operate in shorter runways or strips (less than 1000ft at sea level). The specific numbers found in the simplistic stock 170 POH (referenced in the table below) is very different that the actual performance numbers once a few modifications have been installed.

Modifications! My favorite subject. The original intentions of a C170 was for the “business traveler” or for families that wanted to upgrade from a two-seater C140 to a four seater. Albeit the two extra seats in the back was realistically meant for two kids rather than modern day adults (things were little different back in the 40s). Nowadays the epic 170 is used for many different purposes and the super 170 was born. 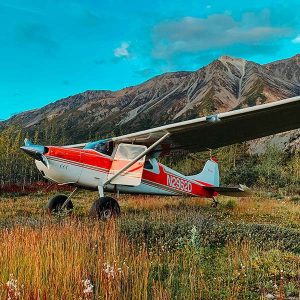 Imagine a world beyond runways. Where you can explore the backcountry as you please and have the ability to put your aircraft down in places that were thought only accessible to super cubs or helicopters. Yet you are able to carry all the supplies you need to be away from civilization for days and you are able to cruise at 120 miles per hour to get there. The comfort of the 170 was not compromised, and most have great insulation for cold weather and keeping the airplane noise to a minimum. The following mods make this an amazing bush plane.

The most common upgrade is the Lycoming O-360 180hp engine STC which may include a constant speed prop. While it does not change useful load on paper, it definitely added extra “umpf” to the performance. Another recent STC that got approved is the IO-370 conversion producing 190-200hp of power making this airplane a beast! No official POH has been established for a super 170, and due to the variations in mods it is difficult to come up with exact numbers. Based on experience we can extrapolate some of the numbers in the chart below.

Other common mods include piecing together parts from newer models, such as swapping in C180 gear, and C175 wings with extended fuel tanks. The list is endless, but there’s a difference between those mods that have STCs keeping the aircraft certified versus those that would put it in an experimental category. Luckily, there are over 100 STCs that can be applied to the 170, including jump seats, extended baggage, etc, etc. Just be aware that many of these mods will make the airplane heavier and that’s where the higher horsepower starts making a big difference.

The C170B makes a great bush plane for off-airport ops if that happens to be your thing. Especially when paired with 29-31” Alaskan bushwheels and a Hartzell carbon Trailblazer propeller. There are several STOL (short take off and landing) kits you can install to lower your stall speed and reduce your landing roll, such as the Horton or Sportsman’s. This airplane can fit two people, two bikes and camping gear for your backcountry adventure. You can even squeeze in two dogs (if they each weigh 5lbs or less) as I have proven from personal experience.

Once you get comfortable in a 170, it becomes an extension of your body. You learn to trust the airplane, and get really good a judging which places can be appropriate for landing and take off. This plane can certainly take off within 200ft, but it’s not just the mods, it’s also about pilot abilities and proficiency.

What are my tricks to making a short field take off?

I set myself up with one notch of flaps so the handle is easier to reach on takeoff roll. Get lined up with the runway, hit the breaks and start adding throttle, release the breaks! I start the roll tail down and quickly lift it up to save the tailwheel from getting banged up with rocks and debris. Lifting the tail quickly will increase drag from the main gear but it also decrease drag from the tail in case of mud or uneven surfaces. I feel the benefits of this technique outweigh the drawbacks.  As soon as I feel it is ready to fly I reach for the flap handle and jerk myself off the ground by lowering flaps to 30-40 degrees for a second as I rotate for lift of and then immediately slight forward pressure on the yoke to remain in ground effect as I pick up airspeed. Flaps are quickly raised incrementally to decrease drag.

There is extensive information about short field landings and it’s all about how slow you can get with your aircraft without losing control authority. This is why practicing slow flight on a regular basis will help you hone those skills necessary to slow yourself down a low altitudes in a safe manner. This airplane has the ability to land shorter than it can take off so always keep this in mind when you are choosing a landing site.

There is a big debate on wheel landings vs three point and I personally tend to promote the former. Keeping in mind that there are situations for each technique and thus practicing each type of landing is critical for proficiency. Tailwheel airplanes like landing in a tail high attitude, it reduces strain on the tailwheel and the airframe in general. It also increases visibility over the cowling which becomes very important in narrow runways that may have debris. Most importantly, it ensures that you will have rudder authority all the way until you decide to lower the tail, this decreases the chances of ground loops and keeps the pilot in control in this critical stage of flight.

There is a time and a place for three point landings, and that is when you absolutely have to land as short as possible. The three point landing allows you to slow the plane down as much as possible. This not only decreases ground roll but it also reduces the chances of rocks to jump up and hit your airframe and prop.  Keep in mind, as soon as you enter that three point attitude flare and the stall horn is blaring, you are committed to the landing and you are giving up 90% of control authority of the rudder and ailerons. Ground loops are most commonly caused by three point attitudes and poor pilot skills on the ground.

For most instances, I choose to wheel land the airplane unless absolutely necessary to land short, and in those instances you should be asking yourself will I be able to take off from here?

Is the 170 the right airplane for you?

There are several questions you have to ask yourself. What is the purpose of your airplane? What is you budget? How much time do you want to put into it to make it your ideal plane? The C170 will serve many purposes at a lower budget than many of the equivalent alternatives. The only problem its that there is a limited number of them in the world today and they are not making any more. All I know is that all the pilots I’ve met that own one of these have a hard time letting them go, and if they have they eventually regret it!