Taxiing at your Destination Airport

Unfortunately, you will not have google maps on your cell phone to guide you around the taxiways and other movement and non-movement areas at your destination airport.  An essential part of your preflight planning needs to include becoming familiar with not only the runway information and layout at your destination, but also the airport diagram and all the awesome information it contains.  Take a look at the video above, and also the video below to get a firm grasp of what you can find on an Airport Diagram and how to use it when preflight planning, flying, and taxiing!

In March of 2000 in Sarasota, FL, a 172 and 152 collided during takeoff of RWY 14, killing all four involved (two pilots in the 172, and the CFI and student pilot in the 152).  The Tower cleared the 152 for takeoff from RWY 14 full length, and 6 seconds later, cleared the 172 to line up and wait.  The problem was that the 172 was holding short of the RWY at taxiway “F” approximately 1,000′ down the runway, and neither the Tower controller or the Pilot of the 172 used proper phraseology to specify “line up and wait rwy 14 at foxtrot”.  The Tower controller incorrectly believed the 172 was holding short at taxiway “C” for a full length departure.  As the 152 lifted off, witnesses reported it appeared to try and make a right turn to avoid the 172 on the RWY in front of it, stalled, rolled wings level and impacted the top of the 172.  The propeller of the 152 cut through the cabin of the 172 and the fuel tanks.  The two aircraft came to rest inverted with the 172 mostly on top of the 152.  All four occupants died due to carbon monoxide poisoning and thermal injuries, combined with blunt force injuries. 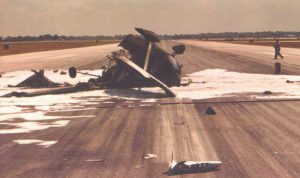 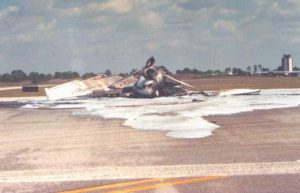