While there are 6 different types of fog, they all have somewhat unique characteristics, and at the end of the day all you really need to know is when to expect fog to appear out of thin air.  For the purposes of your written test, try to remember the characteristics of each of the types below, for your everyday flying I have a much easier task for you….stay out of the fog!

Don’t worry, this fog is not radioactive.  Radiation fog forms on clear calm nights when the warm ground radiates its heat away quickly and cools the air near the surface, causing the moist air to become saturated and the moisture to condense into fog.  This type of fog may only be a few feet thick and from above can appear totally harmless, as you can still see the ground straight down from above. The problem arises when you try to land in such fog and find that while you can see through it from above, you indeed cannot see through it horizontally to be able to see the runway in front of you when trying to land.  Good news is light wind of 5 knots or more will typically make the fog lift and dissipate (it may first become worse until the wind picks up enough to dissipate it). 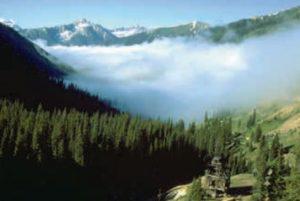 REMEMBER: Convection moves up and down, ADVECTION moves sideways.  Advection fog occurs when warm moist air comes into contact with the ocean’s cool surface.  This cooling from the ocean makes the water vapor in the warm air condense into visible moisture (fog).  Because this generally only occurs near the ocean, only coastal areas are affected by this type of fog.  A slight breeze or warming of the land can draw the fog in off the water onto land.  Generally, a wind of 15 knots or greater will cause this fog to lift into low stratus clouds. 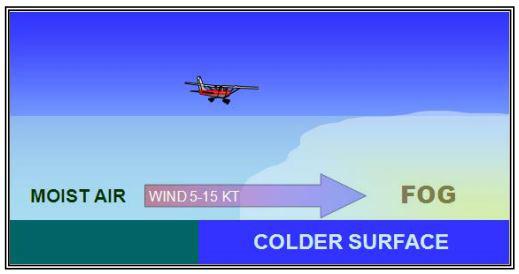 When warm moist air is forced up the slope of a mountain, it cools and the water vapor condenses into fog.  It is common to be found in the winter and spring out near the Rocky Mountains.

When warm rain falls through cooler air, it can make the surrounding air saturated with moisture and form a nice thick layer of fog.  This will usually happen with warm fronts or very slow moving cold fronts.

Rare to find in the lower 48, ice fog is really just Radiation Fog that forms when temperatures are at or below -25 degrees F.  It is fog made of ice crystals and beautiful to see, as well as very blinding due to how reflective it is.

If you’ve ever looked at a warm lake on a cold morning you’ve seen steam fog forming.  As the cold dry air moves over the warm body of water, it quickly becomes saturated with moisture evaporating from the warm water and the moisture condenses to form steam fog over the water. 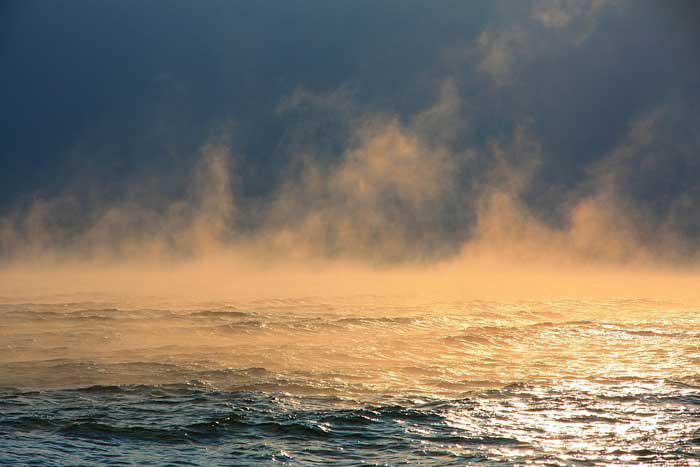