Seeing in the Dark

The human eye works differently at night than it does in the daytime.  See the three diagrams below.  At night, your eyes use the “rods” more than the “cones”.  There are more rods located away from the rear center of your eyeball, making your night vision more effective if you use “off center viewing” or try to see things more with your peripheral vision at night.  This is because as light enters the eye at an angle (your peripheral vision) it will strike more rods and translate to better vision in low light.  This contributes to the “blind spot” in the center of your vision at night, where you will not be able to see things as well that you are directly focusing on.  A general rule of thumb is it takes 30 minutes for your eyes to adjust to the darkness at night, and you should avoid artificial lighting for 30′ before flying at night (it takes less time for younger healthier people and more time for older people or people who are not in as good physical shape).  Consider using a red flashlight on your preflight to protect your night vision! 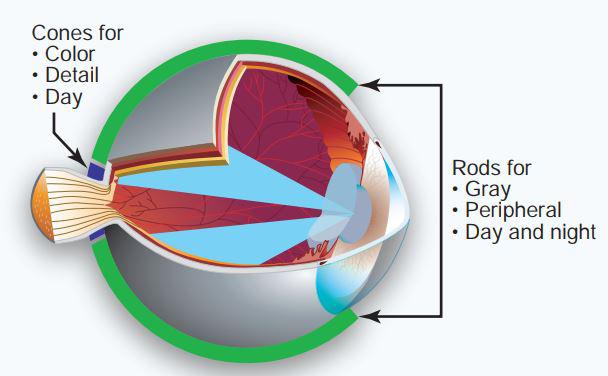 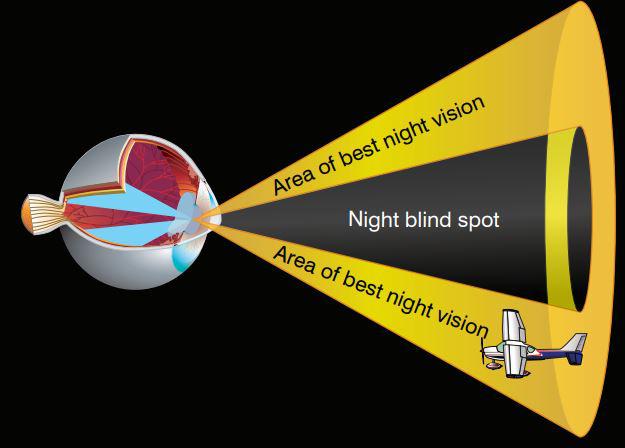 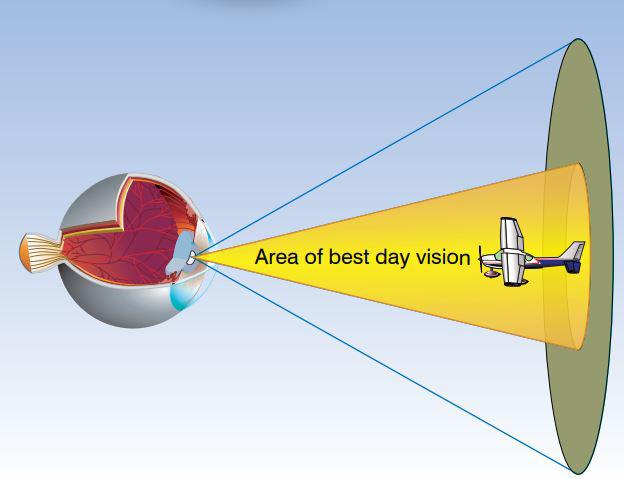 Although Pilots are not required to use oxygen below 14,000′ msl (or 12,500′ msl if you’re up there over 30 minutes), the FAA does recommend you use supplemental oxygen when flying at night above 5,000′ msl as the oxygen helps the rods in your eyes to work better and you will actually be able to see more if you do use oxygen.

The higher the better at night.  Silly things happen at night, like students turning the fuel selector valve to OFF instead of the other tank (this became so regular with one of my students he was no longer allowed to touch the fuel selector in flight at night!).  Other things like spatial disorientation, and if you’re unlucky enough, engine failures can occur on rare occasions too.  Simply put, the more altitude you have at night the more time you have to deal with these problems (just don’t neglect what we said above about using oxygen at night).  Flying at higher altitudes will make you more tired, lower your night vision, and overall make you a less effective pilot, hence the encouragement to fly with supplemental oxygen at night!

In the extremely unlikely event you do have an engine failure at night (or the more likely event you mistakenly select the fuel valve to off in the dark), thinking ahead of time of where you will land off airport is a good thing to have in mind.  I try to always be talking to someone at night, even if it is just getting regular VFR flight following to have me on someone’s radar and be able to scream “help” quickly if something goes wrong (I’d rather be squawking an assigned code and talking to approach control than have to try and tune in 7700 and make initial contact with a controller after I already have a problem).  So where does the FAA recommend you ditch at night?  Unlit Areas.

Why would they suggest that?  Well although landing on the interstate is tempting, your Cessna won’t hold up too well when it gets plowed over by an 18-wheeler.  Other hazards of landing on roads include hitting power lines and street signs/lamps that you probably won’t see until it is too late, along with the hazard of possibly hurting someone else on the ground.  Unlit areas are probably going to be either open fields or trees depending on where you are in your particular locale.  Personally, I like the idea of flying on clear nights with a bright moon for the very reason of being able to see what’s underneath you!

Previous Topic
Back to Lesson