Weather Factors when Flying in the Mountains 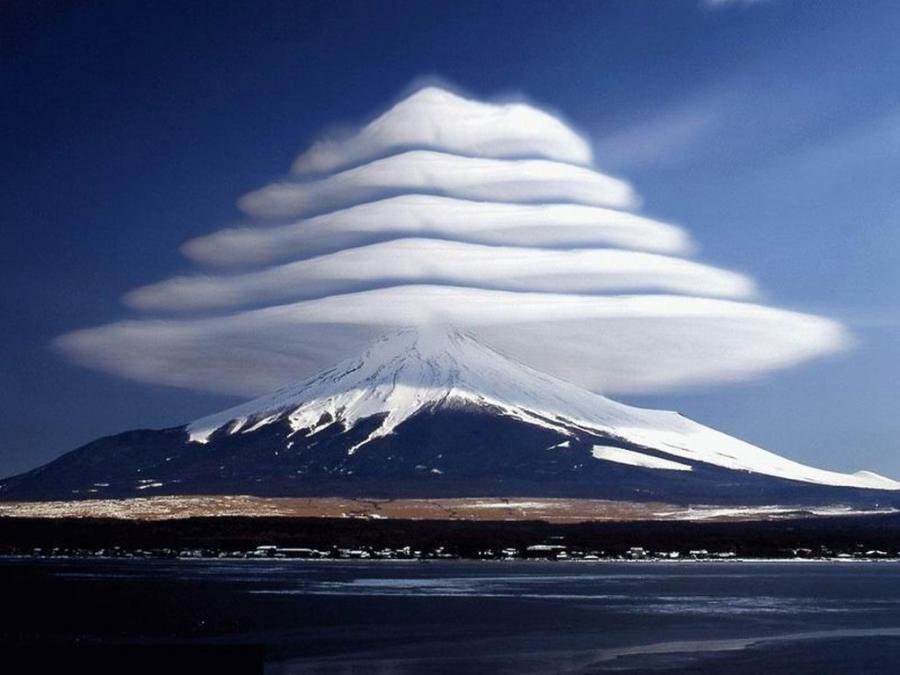 We’ve already talked about clouds, but in this TOPIC we are going to talk about two cloud types specifically associated with mountains and big hills, as well as some of the things to be aware of when flying near mountains.  We could spend hours talking about the weather and other factors associated with flying in the mountains, but for this course, we’ll keep it simple (check out our instrument pilot course for more mountain flying tips)!

Guess what!? Yup, you guessed, these clouds are LENS SHAPED, hence LENTICULAR.  A good example of these clouds is in the photo above.

Lenticular clouds form due to the wind blowing across the top of a mountain at a pretty good speed.  The wind on the windward side is pushed up and then pulled back down on the downwind side.  This process results in a slight drop in pressure on the downwind side of the mountain.  This drop in pressure results in a drop in temperature (thanks Bernouli).  The slight drop in temperature forces moisture in the air to condense and form a cloud.  Given that the air quickly returns back to normal pressure and temperature in a short distance, the water then goes back to vapor and you do not see the cloud continuing on the downwind side of the mountain.  This is different from normal clouds as we generally think of a cloud as a single parcel of air.  In this case, the “cloud” we see actually has tons of air rushing through it.  It is not one stationary parcel of air, but rather a stationary zone of low pressure and low temperature causing moisture to become visible momentarily before it flows on by.

It typically takes very stable air blowing at 40 knots or more to generate these type of clouds.

Rotor clouds are caused by the same weather pattern as lenticular clouds, stable air blowing perpendicularly across a mountain range.  A rotor cloud will contain severe turbulence and is generally found just below the lenticular clouds, at or below the top altitude of the mountain tops.  Rotor clouds form down here as a result of the surface friction with the wind blowing over the mountain. Take a look at the two pictures below to get a better understanding. 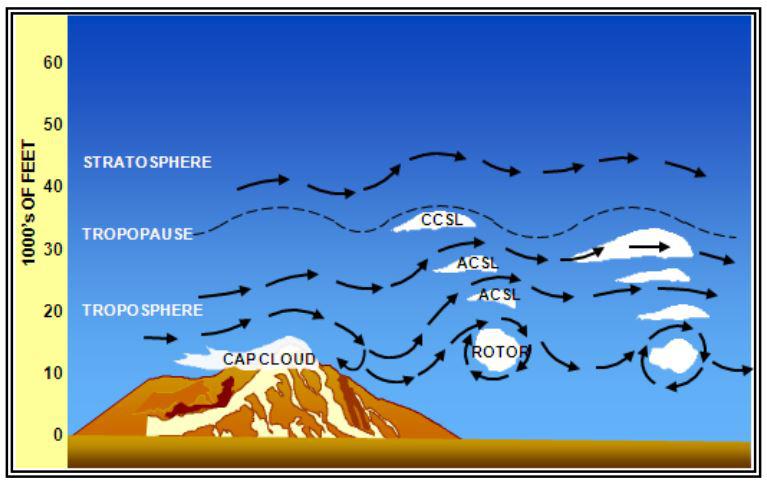 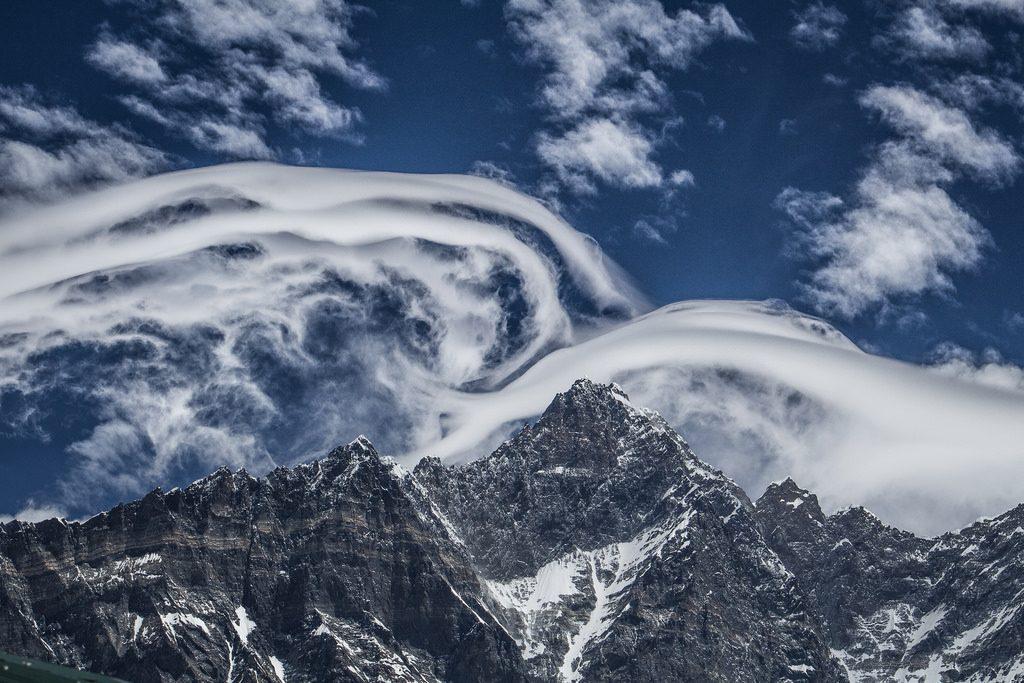 Why are the lenticular clouds not as smooth and pretty as the ones at the top of the page?  Take a guess! and read the answer at the bottom of this TOPIC.

So it seems obvious with all this air circulating around very quickly we can expect some pretty good turbulence.  We refer to this as mountain wave turbulence and it can be even nastier than the regular bumps that bang you around.  The trouble with mountain wave turbulence is, when air is flowing perpendicular to a mountain range, it is going to be creating updrafts as it flows up one side and downdrafts down the other.  These vertical air currents are so strong in fact some aircraft could shut down their engine and still not be able to descend on the upwind side of the mountain as they get “picked up” in the updrafts.  The same is true and much worse on the other side of the mountains.  You NEVER want to approach a mountain range on the downwind side of it!  Especially if you are flying low and in a smaller airplane without a whole lot of excess power (basically if you don’t have the ability to climb at 4,000+ fpm you should rethink your approach).  As you see in the diagram below, as you approach the mountain from the downwind side, you are going to get pushed down towards the ground, and despite your best efforts, it is doubtful your airplane will have enough power to climb up faster than the downdraft is pushing you down.  Pilots who are unwise and unlucky enough to find themselves in such a situation generally either wind up flying right into the side of the mountain or stalling trying to climb more than the airplane can and falling into the side of the mountain.  Either is a very bad option.  Don’t try to cross a mountain range with a headwind of any strength, if you do encounter unexpected downdrafts, hopefully, you will have enough margin of error with the altitude you are flying at to execute a 180-degree turn and use that tailwind to help you get back to where you came from extra fast!

Answer: The clouds are less smooth looking due to the air not being as stable (more updrafts and downdrafts rather than just smooth horizontal movement).  The air in the lower picture has a less stable lapse rate!

The private pilot and his passenger departed on a cross-country flight. Shortly after takeoff, the pilot reported to the controller that he was having an engine problem and wanted to return to the airport. An examination of the engine, propeller, airframe, and related systems revealed no anomalies that would have precluded normal operation prior to the accident. The damage to the airplane and the witness marks on the ground were consistent with the airplane being in a flat spin at the time of impact.

The density altitude at the time of the accident was 7,446 ft mean sea level. The majority of the pilot’s flight experience was conducted at airports with a lower field elevation and he had flown to the accident airport on only two other occasions. It is likely that, after takeoff, the pilot misinterpreted the airplane’s reduced engine power and decreased climb performance, due to the high density altitude conditions, as an engine malfunction.

During the turn back to the airport the pilot exceeded the airplane’s critical angle of attack and experienced an aerodynamic stall and spin. 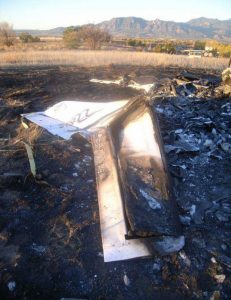 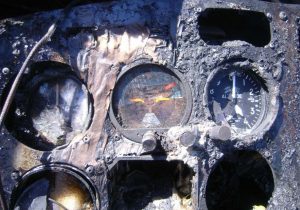 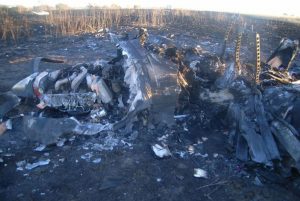 Probable Cause:
The pilot’s loss of airplane control during the turn back to the airport after takeoff in high density altitude conditions, which resulted in an inadvertent aerodynamic stall and subsequent spin. Contributing to the accident was the pilot’s impaired performance due to his use of a combination of potentially impairing medications.