Watch the video above and check out the diagrams below to get a basic understanding of how to approach an airport.  After reviewing the video and text below, watch the video located at the bottom of the lesson to see the complete process of landing at a non-towered airport.

In this topic, we’ll cover:

How to enter the Traffic Pattern

There are two approved methods of entering the traffic pattern at a non-towered airport (the image on the top below is my personal preferred method, especially in a high wing airplane). 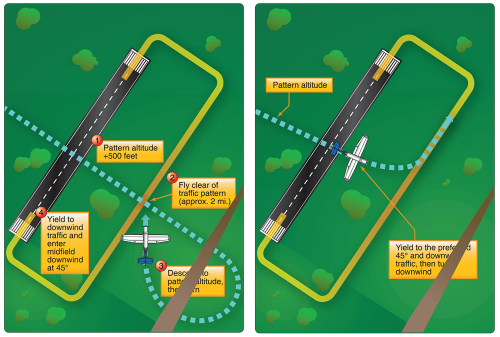 The option on the left shows how you would fly at an altitude 500′ above the posted pattern altitude (pattern altitudes are typically posted between 600′-1000′ above field elevation) to cross over “midfield” giving you the opportunity to both look down at the windsock and see what is going on down there on the ground in terms of wind and traffic, and also it should keep you 500′ above all other traffic in the pattern in case someone isn’t talking on the radio (remember: radios are not required to be installed in airplanes when flying in Class G or E airspace (non-towered airports)).  After crossing over midfield and observing the traffic from above, you then make a descending right turn to form a “teardrop” entry to the pattern, joining the left downwind on a 45-degree angle and at pattern altitude.

The purpose behind this maneuver is to both give you better sight and separation between aircraft, as well as make it easy for you to turn right out of the left downwind if someone was already established on it and you needed to yield to them (you are always supposed to yield to airplanes already established in the pattern, or any airplane established on final to land. REMEMBER, the aircraft that is established on final and is lower has the right of way (since they are somewhat more “committed” to landing than an airplane that is higher), but this is not to be taken advantage of to gain right of way (i.e. quick dive to the ground to be like “Haha, now I’m lower, move out of my way”, we frown upon this in aviation).

The entry procedure to the right is very similar; however, you would approach to cross the field at pattern altitude, and all you would need to do after observing the wind and traffic on the ground is turn left to join the pattern.  While this may seem easier, it presents more hazards as compared to the entry procedure shown on the left. As you cross the runway using the technique displayed on the right, you would be searching for traffic that would be approaching from your right when you are joining the downwind, instead of off to your left. In many airplanes, there can be a blind spot off your right shoulder making it difficult to spot traffic. In addition to this, extreme caution must be exercised when crossing the runway at traffic pattern altitude, as an early go-around by an aircraft on final may put you on a collision course; as the aircraft going around climbs back to traffic pattern altitude.

Regardless of which technique you use, always yield to other traffic already established in the downwind!

Patterns will always be either left hand or right hand.

When flying “left traffic”, you’ll only make turns to the left. The same applies to “right traffic”.

When the traffic pattern is on the side you are approaching from, you can simply enter on a 45-degree angle to the downwind, as shown in the images below denoted. Flying over midfield is not necessary in these instances.

The correct traffic pattern to fly will be located in the chart supplement, which we’ll take a look at in a later lesson. 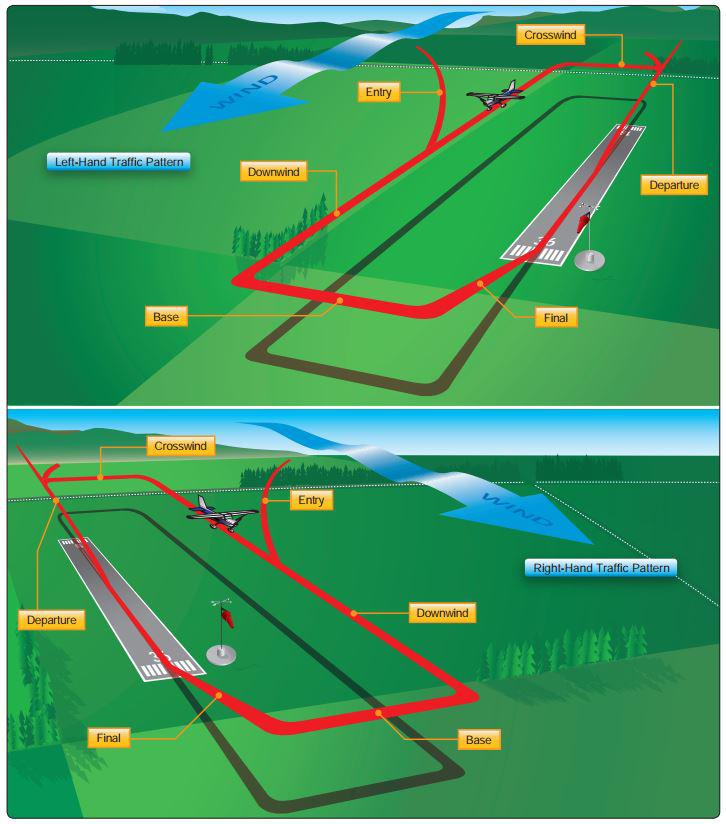 At towered airports the same basic principles apply, however rather than flying a certain left or right traffic pattern or entering on the 45 degree downwind every time, the tower will issue specific instructions each time as to how they want you to approach the airport.

For example, the tower may tell you to just fly “straight in” if you are already lined up with the runway, or enter the pattern on a right base instead of a left 45 degree downwind.  We’ll cover this much more in-depth in a later lesson with lots of examples!

Previous Topic
Back to Lesson