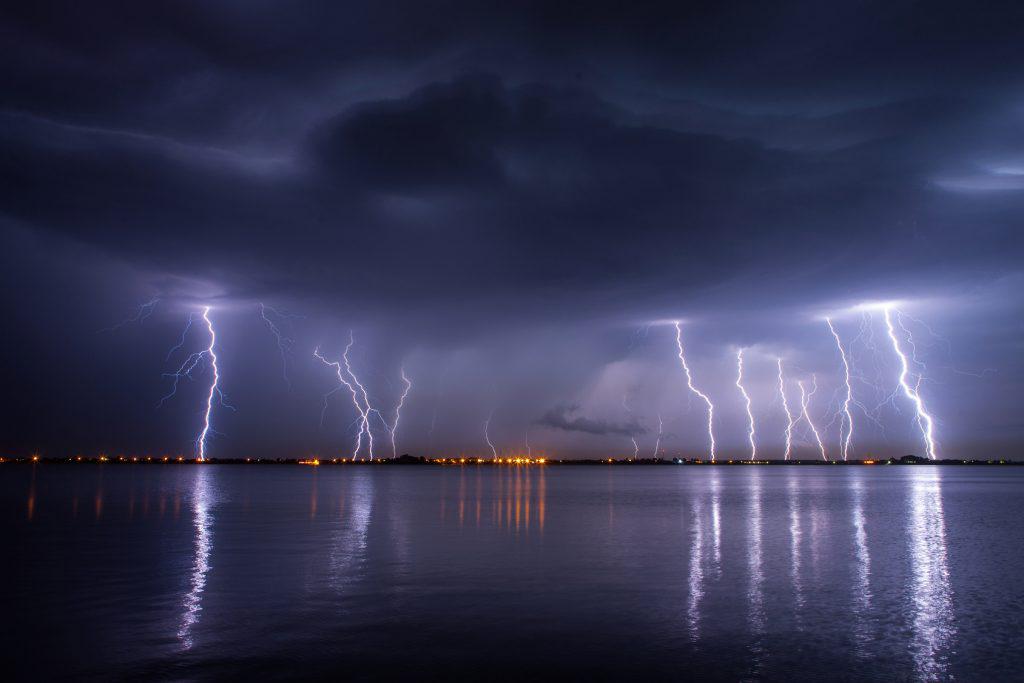 In this TOPIC we’ll go over how thunderstorms form and how you can best avoid them.  If you already watched the video below in a previous LESSON, you can keep scrolling on down past it.  If you want to take some time to review it, go ahead and watch again before moving on down to the rest of the nitty gritty details of Thunderstorms!

To have a thunderstorm (or any severe weather for that matter) you first need to have a few key ingredients.

These three ingredients must all be present, otherwise no light-off, there will be no thunderstorms in the area until all three exist.

The atmosphere must be UNSTABLE.  There must be a nice consistent trend of the temperature steadily dropping the higher you go in the atmosphere to ensure the moist air will be able to continue climbing once it gets its first kick from its “lifting action”.  If there is a temperature inversion in the area, this is likely to spoil the plans of the thunder gods and cap off their fun before it really gets off the ground (literally).

Here is where it gets interesting.  Because at this point we are assuming we’ve met the previous two criteria (Moisture and Unstable Lapse Rate), now we just need to get this moist parcel of air slightly higher than it is now so it will find itself around cooler air than it is, and start ascending to the heavens!

Of course, there’s a couple ways for this to happen.  The most obvious and one we already covered at the beginning of this LESSON is to just heat the air using solar radiation to heat the ground, and in turn, heats the moist air near the ground and make it start rising.  This will work, as it always does with air mass thunderstorms in Florida in the summertime.  However, things get interesting when we look at all the different ways we could get this show on the road (or parcel picked up and climbing!).

Frontal lift isn’t lifting the air from the front instead of the back (does air have a front and back?).

Frontal lift is the lifting of air due to a front moving into the area.  The most common scenario is a cold front coming into the area of moist air and getting “underneath it” as it is obviously going to be colder and denser.  This front lifting slope of a cold front is very effective at lifting warmer air that contains moisture and is often the all import “lifting action” required to get the severe weather ball rolling (or raining, whichever you prefer).

Orographic Lift is a fancy way of saying the moist air gets blown up a slope (like a hill or a mountain) and that is the initial lifting action that brings the moist air to be surrounded by cooler air, thus the moist parcel of air wants to climb and build into clouds and possibly a thunderstorm depending on how unstable the lapse rate happens to be that day.  A good example of this is on the West Coast of the United States.  Often times the coastline gets plenty of rain, yet further inland there is a “rain shadow” due to the mountains.  Take a look at the figure below to see how the windward side of the mountains is often going to be the wet side as well. 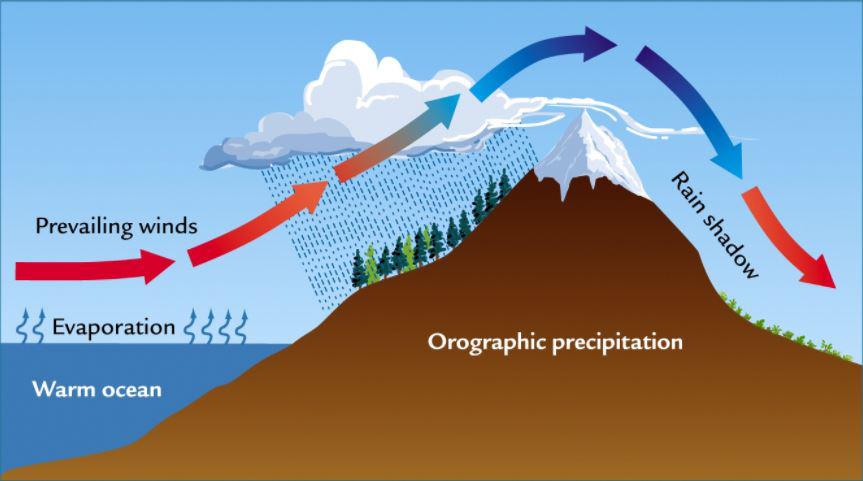 The moist air is lifted with OROGRAPHIC LIFT and begins to rise and condense, giving off heat, furthering its ability to climb higher as a cloud, and eventually the air becomes so saturated it starts to rain.  The interesting thing is because the mountain or hill gives the moist parcel of air coming off the ocean orographic lift, it is essentially jump-starting the water/rain cycle. This causes it to happen so fast and over such a short distance, the clouds dump all their water before they have a chance to be pushed further inland to the other side of the mountain, creating a dry zone we see in the western United States.

Time to put it down

We spent all that time talking about how to lift it up, now let’s talk about how that moisture is going to make its way back to the surface.

Again we have three options:

Let’s first take a look at a thunderstorm’s life cycle.

Stages of a Thunderstorm 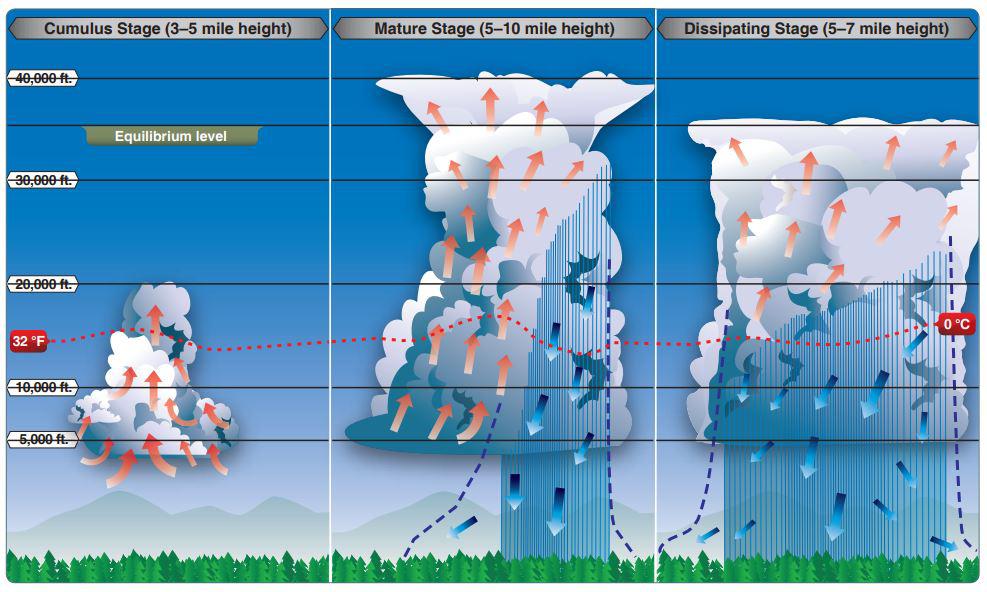 So what determines if this is going to be rain, snow / hail / ice, or virga?

Virga occurs when the air is dry and can absorb the moisture falling from the sky before it hits the ground (think out west near the desert).

Rain starts off as frozen water droplets (snowflakes).  As the frozen water descends back to the ground, it is going to encounter increasingly warmer air, melt, and join up with other melted snowflakes to form raindrops.  The longer the water droplets have to join together (the longer the fall) the larger they generally are.  Think about very tall thunderstorms on a warm summer day in Florida with HUGE raindrops.  They melted at a high altitude from the heat and had a long time to join together (plus the air is probably already quite saturated with moisture in Florida in the summer to begin with, so there’s not a good chance of much evaporation on the way down).

Notice the chart above concerning the life cycle of a thunderstorm.  See how there is a freezing line between 10,000′ and 20,000′?  Imagine it’s winter time and the air is cold, so the freezing line is somewhere around only 1,000′ or maybe all the way down to the surface on a cold winter day (that means 32 degrees F or less at the surface).  Well congrats, now those snowflakes melt on their way down into raindrops.  What about really big snowflakes? Well maybe the temperature aloft is a little warmer, and they were able to join together to form those big sort of wet snowflakes that built great snowmen!

How about ice pellets? If you have ice pellets (basically just frozen raindrops), then it is probably below freezing at the surface and for at least the first 1,000′ -2,000′ above the surface, but there must be a temperature inversion aloft where the snowflakes melt into rain in warm air, then freeze back into ice pellets when they encounter the cooler air.  This is a sign you WANT TO STAY ON THE GROUND! The reason is that freezing rain is the WORST ice you can get on an airplane (it builds up very thick and very fast), and ice pellets on the ground is a sure sign there is liquid rain falling up at altitude, that is then refreezing in cooler air.  If you were to fly around the layer where the cold air below and warm air above meet, you could be sure to pick up lots of ice, very quickly on your airplane.  You won’t hear a lot of stories from old timers about how they flew into freezing rain in their Cessna 172 awhile back and about how fast the ice built up, they simply aren’t around to tell the tale.

Sorry if you are an Ohio fan. 🙁

Hail, as you can imagine, is quite bad for airplanes.  The good news is it doesn’t just come out of nowhere, it comes out of very tall intense thunderstorms.  When conditions are just right for supercooled water droplets to link up and freeze together in the tops of thunderstorms, you get hail.  Because it makes its way to the ground rather quickly, it only melts a little on the way down.  Still, when you see hail on the surface around 1/2″ in diameter, you can bet it is anywhere from 3/4″ to 2″ if you were to hit it up at altitude.  What kind of damage can hail do? Ask Delta if they plan to fly a little further away from the thunderstorm next time?

The hail that did this was less than 1.5″ in diameter.  Just how big can hail get?  Check out the record below! 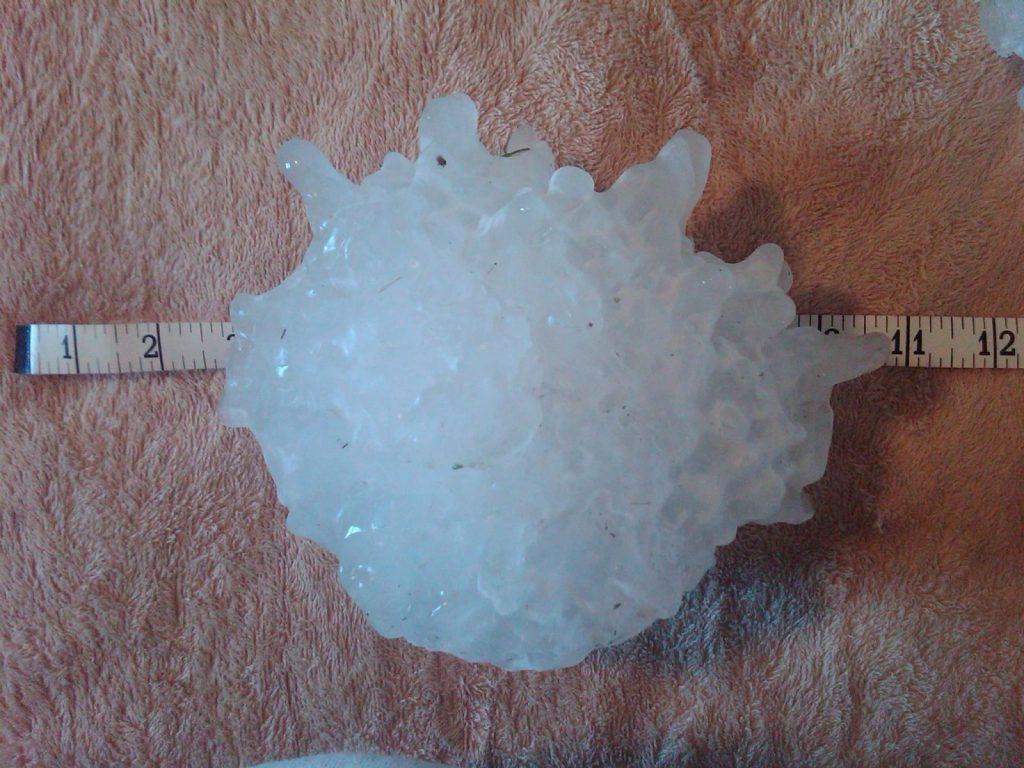 Over 8″ in diameter and weighing in at 1.93 lbs, this hailstone fell during a thunderstorm in Vivian, South Dakota on July 23rd, 2010.  It wasn’t just one giant stone, many close to this size were found on the ground out in the fields.  Moral of the story, don’t fly under, or anywhere near thunderstorms.  Hail and downdrafts along with severe turbulence can easily reach 20 miles from the EDGE of a thunderstorm into clear air where you wouldn’t expect it (due to winds aloft, etc.).  Be especially cautious flying DOWNWIND of a thunderstorm and never fly under an ANVIL top (shown below). 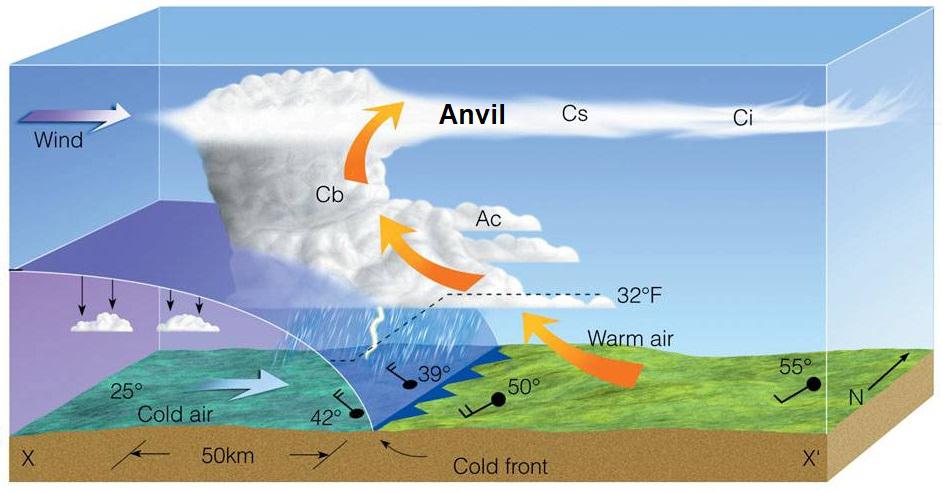 We’ve touched on Virga and the associated downdrafts above and in the previous TOPIC.  Downdrafts can occur from virga or from just regular rainfall (the movement of the water falling down drags the air down, heavier the rain, the heavier the downdraft).  Regular downdrafts can last a long time.  I want to just talk a little more about MICROBURSTS now.

A microburst is really just a downdraft coming down very quickly, same as it does with virga.  It really is the same thing, just a different name you need to be familiar with (Virga downdrafts typically fall under the category of Microbursts, whereas downdrafts from rain falling are just plain downdrafts).  Think of a Microburst as a rapidly descending column of air.  Not only will that column of air push you down to the ground if you fly through it, it will also give you a great tailwind when you try to fly away from it.  The trouble with that tailwind is that it will probably come on very quickly and cause a large drop in airspeed as the wind “shears” (changes speed or direction or both quickly).

Take another look at the diagram below to get familiar again with what the phases of encountering one of these nasty things looks like. 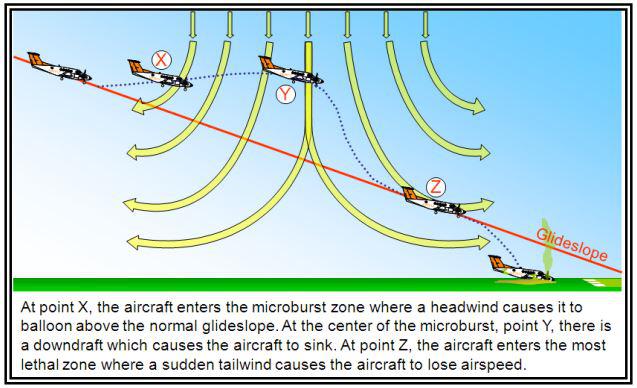